😍 The Sun Sets on Rainbows at Dry Creek

As you may know, it takes years to prepare for an American Iris Society (AIS) national convention. In this post, I share the story of how the Dry Creek Garden in Union City, California became a place where “The Sun Sets on Rainbows.”

In 2014, I was a fairly new Gardener at Dry Creek Garden and wanted to add to the existing irises already growing there. I remembered purchasing rhizomes from an iris society booth in Benicia in the late 1990s and thought it might be just the place to get more irises at good prices.

On the second Saturday in August I returned, hoping they would again have a booth. Sure enough, some very nice ladies from the Mt. Diablo Iris Society had traveled from Walnut Creek, and I was able to purchase 25 different named varieties from their booth. While I was there, a few former horticulture classmates of mine introduced me to Shirley Trio-Probst.

Shirley was preparing for a proposed convention in California’s Bay Area and was looking for a garden with room to plant up to 1,000 irises for the 2018 AIS National Convention. She gave me more details than I could absorb in 38 minutes, but I shared my thought that the Dry Creek Garden might have an area. I told Shirley I would have to ask my supervisor for permission after explaining the details to him and would get back to her.

Upon looking for places in the garden to plant these irises, my supervisor and I agreed on a good location if the convention committee thought so too. 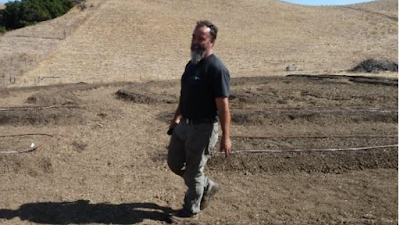 After some time had elapsed, Shirley arranged for the movers and shakers of the local iris scene to come check out the garden. None of them had been to the Dry Creek Garden before; not even then AIS Regional Vice President John Pesek or his wife Barbara who only lived a few miles away.

Our meeting went well, and I was told Dry Creek would be considered (along with other locations) to become one of five display gardens for convention tours. Many more months passed without word, until we found out that Northern California would not host the 2018 convention, but the 2019 convention instead.

After two other locations under consideration had trouble committing to the rules of the convention and other logistics, in fall 2015 the committee offered Dry Creek the gig.

During the 2015 Region 14 Fall Meeting, a meeting for all convention garden hosts was held. Names, phone numbers and emails were exchanged along with the planting bed rules. Beds were to be 4 feet wide and no longer than 40 feet long.

Pathways were to be 6 feet wide so two people could be bent over facing each bed and taking pictures at the same time. Irises also needed to be planted in alphabetical order by name from each hybridizer. So I ran with these rules and started designing the layout of the beds on paper to best use the terrain we were dealing with.

In fall 2016, the first irises were to arrive. These were the beardless ones: Louisianas, Siberians, spurias, species hybrids and Pacific Coast hybrids. September 2016 saw the first three beds made in a patch of soil that had never been cultivated before.

Lots of rototilling, adding compost, measuring bed boundaries and irrigation installation was done prior to planting the first beardless irises.

Beardless irises need to be planted a year earlier than bearded irises for a convention to help get them established for a better display. This was completed and I now had about a year to get the bearded iris beds made before their arrival in fall 2017. 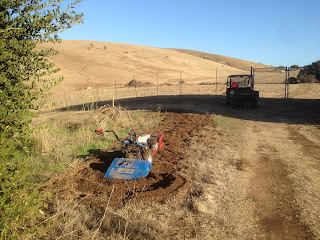 Preparing soil with a rear-tined rototiller for new iris beds 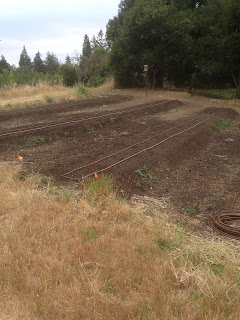 The area where the bearded iris beds were planned to go was an open field. It needed a fence to enclose the area and protect it from wildlife and the public. Being a public agency, we had to get our board of directors’ approval to appropriate funds to install an 8-foot-tall cyclone fence around the area.

The soil had also never been cultivated before. It was just a sloping hill of non-native grasses (weeds, to be frank) and a few California poppies poking through the smothering grasses.

In April 2017, I prepared and delivered a PowerPoint® presentation to the board to show where we would be planting the irises. The presentation included fabulous pictures of irises in bloom so there was no way they could say no. When all was done, they approved the $15,000 fence. 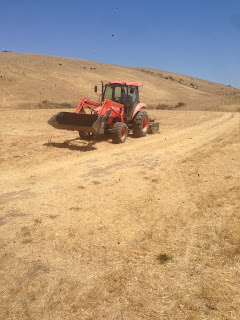 A tractor with bucket and box blade helped us break ground for the bearded iris beds.

We broke ground for the planting in mid-July 2017, which was before fencing was installed. I couldn’t wait for the fence any longer as the bearded irises would be arriving over the next two months. First by mowing the weeds, then plowing the soil with a tractor.

It was a hot and dry time of year in California, so I had to pre-wet the area to rototill for 21 beds and pathways. Damp soil made this easier but it still took days to complete. 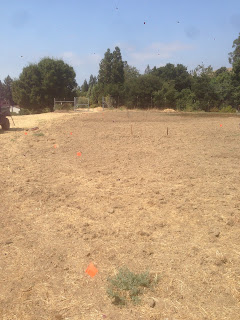 Once the area was satisfactorily loosened up, a volunteer and I went to work measuring out the bed and path perimeters. This done, we shoveled soil from planned pathways into the planned beds to raise them 6-8 inches above the path.

This was back-breaking work to say the least, but two months later the beds were built. About 3-4 inches of compost was added to the top of each bed and rototilled in. Next, the initial dripline irrigation was laid onto the top of each bed, but it could not be hooked up to water until the water line was brought in and this was not completed until spring 2018. Once the dripline was installed, we were ready to plant! 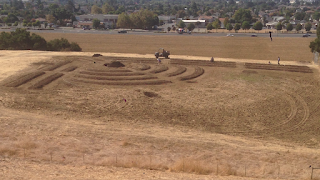 Starting on October 1, 2017, the members of the Mt. Diablo Iris Society helped plant 740 bearded irises at the Dry Creek Garden. These were hand watered for the first six weeks until the period of regular, seasonal rainfall began.

Each attendee would cast their vote for their favorite bearded and beardless seedling during the convention. Winning the competition would be tricky as the seedling would have to be blooming on the day of the garden tour, planned five years ahead of time, between 8am and 3pm in late April at a convention host garden in Northern California.

The winning bearded entry and beardless entry would be announced at the final banquet of the convention. What are the odds of it all working out? 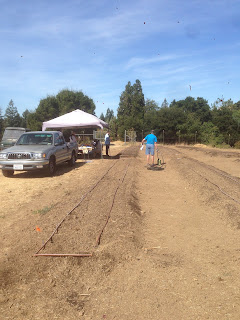 Volunteers from the Mt. Diablo Iris Society at Dry Creek in October 2017 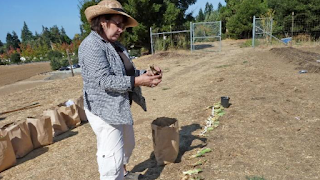 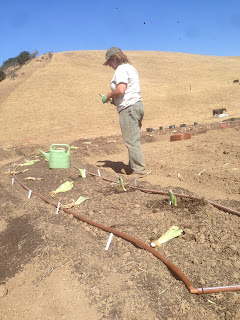 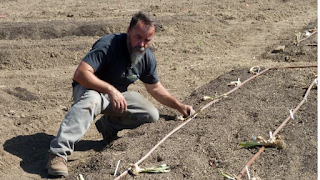 I was also carefully spacing out guest irises to ensure each had room to grow and thrive. 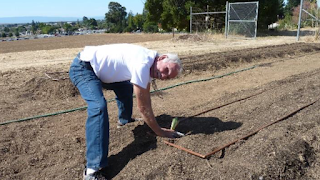 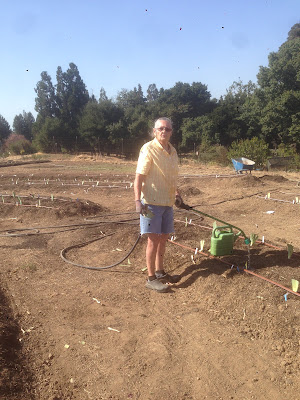 Shirley Trio-Probst hand-watering one of the 740 newly planted rhizomes.

During the planting, I had already begun to trap gophers. Three the first day, three the second day, then nothing. That was the beginning of over 100 gophers dispatched from the iris area over the next two years. Not a single iris was lost to gophers during that period.

(I use Victor Black Box® traps, in case you’re wondering.) Once gophers were trapped, they were put out for the wildlife to eat which they gladly did. Not a gopher wasted!

For three long months after planting, there was no fence. The company that won the bid to do the work had to complete their fence project at the Oakland Zoo before they could start ours. I had many restless nights wondering if someone was pilfering irises from the Dry Creek Garden. Luckily, none were taken.

Deer tasted some of them, but rhizomes were left on the ground near their planting hole and I could quickly put them back in their spot. Only one, ‘Miles of Smiles’ by Mike Sutton, was never found. The fencing company arrived to start our project on December 31, 2017; and I could finally stop worrying. Three days later, the irises were safe in their cyclonic enclosure.

Stay tuned for Part II describing the next sixteen months leading up to the 2019 AIS Convention, “The Sun Sets on Rainbows.” 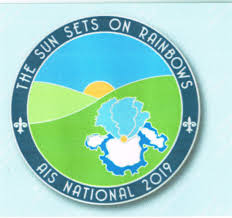